The Inherent Pull of Life 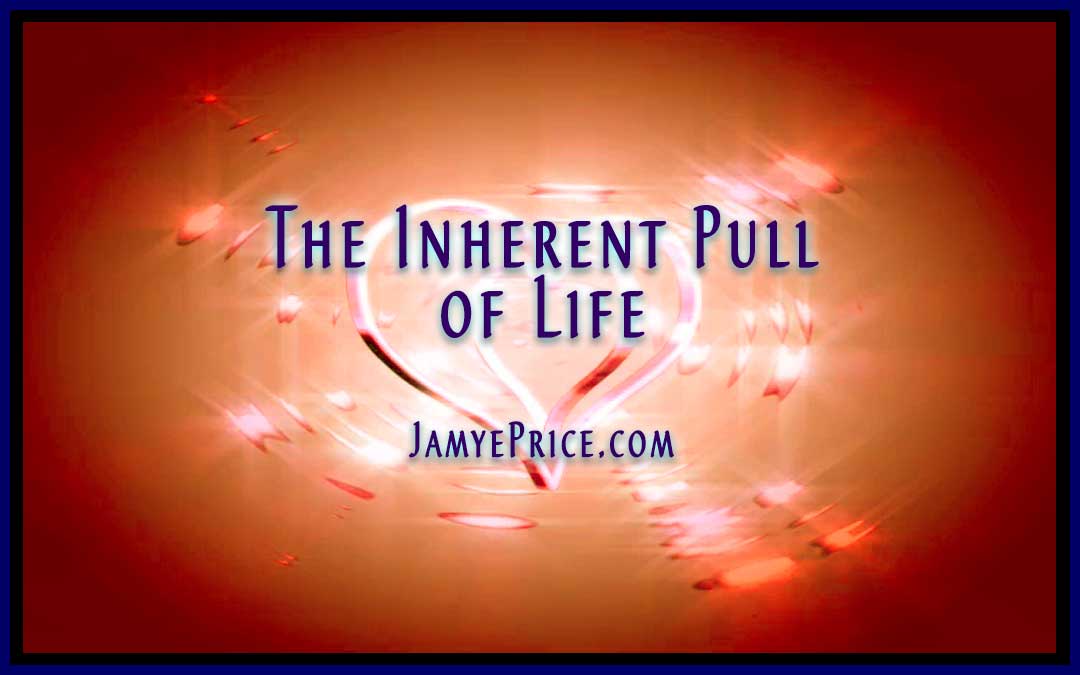 Areon, the Lyran Council of Time, gave me a teaching using the subatomic structure as a deep metaphor for Life. Within this metaphor the reflection of so much of our world is clear. The laws of nature reflect deep truths that guide form, function and our interactions.

The Inherent Pull of Life is Improvement

It’s not always easy to see in a moment, but it becomes clearer as we develop a perspective of seeing beyond the moment. This conscious focus and interaction is a core aspect of Ascension.

As we explore the metaphor below, we begin to see the core structure of this inherent pull of Life towards improvement. Areon says, “Life is fail-safed toward Love.” When there is so much chaos and harm in the world, that seems like an avoidance of reality. But beneath that chaos is a new foundation birthing.

This very basic overview, using linear words, will detail many layers of metaphor within the physics of our world.

An atom, a basic building block of form, is composed of protons, neutrons and electrons. The nucleus is the center of the atom. It contains the proton which is positively charged, and is stabilized by the neutron (neutral charge). The positive charge of the proton attracts it’s opposite, the negatively charged electron. The electrons move around the nucleus in an electron cloud.

The Importance of Neutrality

The neutron is the largest of the 3 particles and the electron is the smallest. This signifies the importance of neutrality, and even the “power” of negativity.  When neutrality is insufficient (when there are less neutrons than protons in the nucleus) the positive charge of the nucleus is not stable. This creates a ‘radioactive’ or unstable experience.

Have you ever met those positive people that aren’t really stable? They are all about Love until triggered, then they start emitting alpha particles all over you! We all may have some things that throw us off balance, but the overall experience will be more consistent when you are authentically stable rather than avoiding reality to create the illusion of love and light. 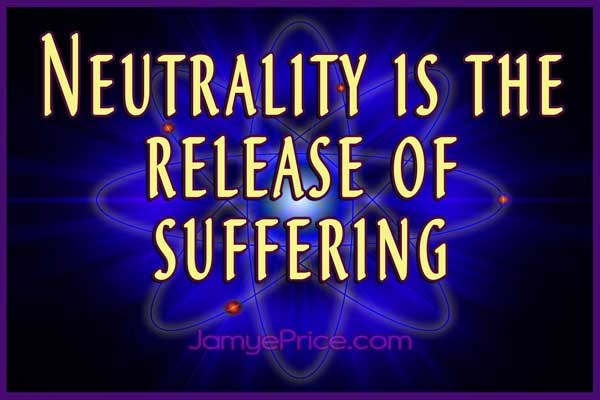 As we remain neutral and focusing on the positive we are stably creating new structure.  When your neutrality is equal to your positivity, you are powerfully creative. It may take time to manifest, but it is forming. Your neutrality also helps you to enjoy the path of creation as it is smoother and calmer, even though it still has ups and downs.

The positive pull of the proton attracts its completion, the oppositely charged electron. The most stable atom has an equal amount of protons, electrons and neutrons. The neutrality allows for an easy connection of the proton and electron. Positive and negative aren’t just good or bad, they are the full spectrum that creates in this realm.

What if anything negative in your life wasn’t a punishment, but a completion?

The electron seems to be pulling away from its oppositely-charged proton (centrifugal force), but that is actually an illusion caused by straight-line inertia—movement forward is the natural flow of Life.

The centripetal force is the strongest force acting within the atom, because without the pull of the positive proton, the electron would just continue forward. The electron does not ‘pull away’ as the illusion of centrifugal force would suggest.

Furthermore, the electron is not always a particle, it behaves as a wave until it is ‘pulled’ into form by the proton. The stability of the nucleus and the completion of the electrons creates a stable new structure, though too small to see, that is building new form. (We’ll discuss the pull of the proton in more detail as we talk about the spiral in a later post).

It is the pull of the positive that is shaping life.

Your information, your boundaries, your DNA—it all applies. 1% matter, 99% invisible engine of Life. Even humans are 1% different form, 99% connected and reflective—meaning at our core we are more similar than different. Same stories, different details.

This exciting time of Ascension is about learning to consciously interact with the 99% aspect of Life. In this way, the physical part of you starts to utilize the non-physical more and this reduces effort.

There’s a catch though!

In order to use the momentum of the invisible aspect of self, you must become clearer within yourself. The 99% invisible is the subtle realm.

The subtle realm has different rules than the physical realm.

Subtle “speaks” directly to subtle. Your Subtle Bridge (as Areon defines it), your thoughts and emotions, are subtle and they “speak” directly to subtle. Your intent, including your thoughts and emotions as well as conscious and unconscious beliefs and desires, is the totality of your vibrational information.This is what emanates into the subtle realm, in-forming your creation.

But we’re also the 99%! When the 99% (subtle aspect of you) becomes empowered through your focus on your self healing, your loving nature, your balance and your clarity—that’s when the world changes. It’s time for the 1% of the 99% to wake up. The 99% aspect of you has always been there, you’ve been interacting through default.

Rather than living life by default, a core teaching of Areon is get YOUR energy into your life! As I’ve been implementing this over the years, I recognize that the first impulse is usually for action and controlling my experience. I have to settle down, observe and recognize the pattern of force repeating in sneaky ways. 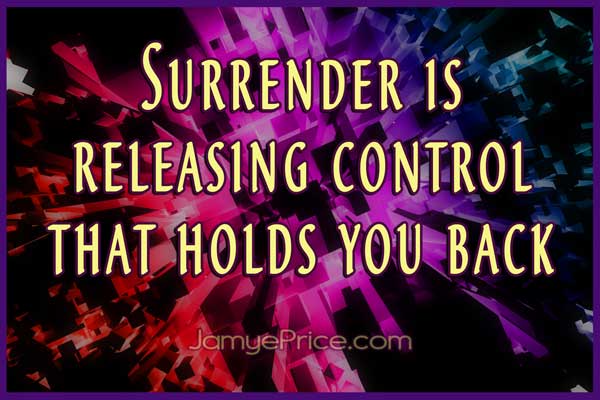 A good practice is repeating, “I surrender my will to (my) Divine Will.”

Surrender isn’t about your lack of value, it doesn’t mean no action ever. It is about releasing control that is holding you back so that you can blend more with your Divine nature.

Another way I’ve soothed this habit is by asking, “What is the gift (or opportunity) in this challenge?” It’s easy when things aren’t challenging, but once you honor the challenge, you open to the natural support of the 99% of you, and of Life.

You are going with the natural flow of improvement.

This is a popular term. What does it really mean when someone says, “I’m holding space for you (or for some creation)”? It is a reference to the space within, your subtle, inner realm. It is a reference to holding or containing a potential. In essence, it refers to the 99% aspect of you, but more clearly, your nucleus. The nucleus of an atom holds the positive proton and the neutral neutron.

It is the positive potential that you hold within the nucleus of you.

When you are patient, you are neutral. When you are focused on your potentials, your positivity creates a natural pull to completion. The electron is not just negative, it is opposite, the reflection that completes. The potentials that you are “holding space” for are too small to see yet, but form is building.

Your healthy boundaries create the space within you that allows the full flow of life, even the “negative” that completes flow. Your patient positivity creates a stable nucleus of potential, the space you hold, in order to create new form.

Love is the Inherent Pull

This realm is one of attraction. Like the nucleus of the atom, you are magnetizing life to you through your vibrational resonance. Your neutrality is imperative to stable creation. Your positivity pulls Life to form.

Positivity doesn’t just mean happy stuff; it’s desire, passion, excitement, want, need… Want and need aren’t bad, they are natural, you are creative and time is currently part of this physical structure that guides you forward.

When want and need are blended with desperation or lack, it causes suffering. Neutrality is the release of suffering, as it is the strength to surrender your human fears to the unknown, and trust your flow with Life.

Your intent, the 99% invisible aspect of you, carries the totality of your vibration. This is why Areon generally refers to the Law of Attraction as the Law of Resonance. Same thing, but it helps reinforce the understanding that you are NOT controlling the subtle realm into compliance with happy thoughts, your whole resonance is drawing creation into form based on your totality of vibrational information.

Life isn’t granting good to good people, it is unconditionally responding to flow.

Your Love flow creates a structure of Love. That builds a new future based in Love. It changes your experience to one that flows more easily with Life.

The inherent flow of Life is improvement.

Life is fail-safed toward Love.

Amplify your Love, and you begin to create a Life of Love that flows easily and ripples out to create a new world.

You’re atomic. You’re nuclear potential of Love. It seems small, but there is a profound and powerful force within you. Let it power this realm with your new-clarity of the awesome Love that is within you, interacting with all life. 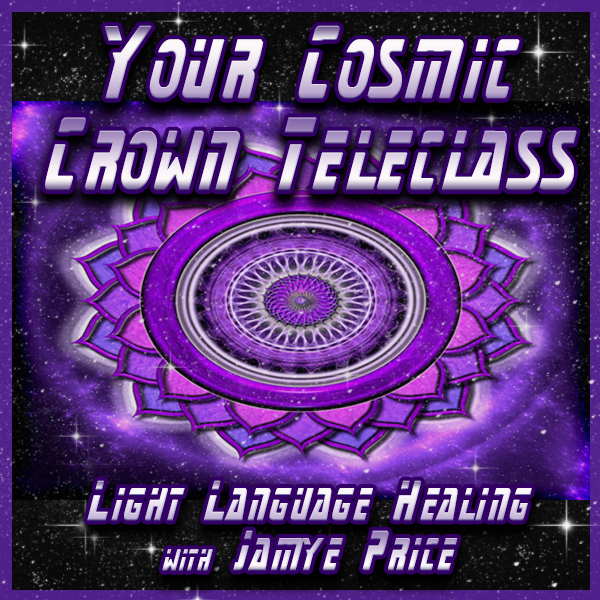