As the eclipse approaches, you are called to reflect on the shadow energies that have been over-protected for too long. All life has a mechanism of survival that creates connection between what seems separate.

Like a rubber band, it can be stretched away but the ricochet of separation stings as potential energy is realized in the pain of connection avoided.

A pause as the night is engulfed by darkness. The tesseract reacts as inner pain is released and the outer potential is shadowed from the suns light. What is really happening depends on what layer you see, for the sun, so far away, pierces skin without a breaking point.

The illuminated realm is a reflection as shadows show time moving, intertwined beyond memory for the unconscious, but ribboned through each being of fiber optic able.

There is a depth of freedom within each container, even though the limits seem so final. Indeed, it is a condition of the conditioned as invisible divides the infinite into finite and those with eyes to see connect the dots.

In Time’s presence the door opens and closes as you feel the waves of wind pushing space. Does light get in or does it escape? Here, Lightworker, your infinite conscious saturation is made aware as a wave of information breezes through.

The mechanism of push/pull pulses through the body, the being, the blight and spins the depths of darkness to light. That which has no name and all named is unconsciously blamed, for control cannot be tamed. It always erupts into volcanic flames, creating new homes on fresh terrain. Don’t step until the time is right when angry fire has cooled in the night.

The tesseract crosses, and wins become losses, as the intersection turns into many directions. Four is seen as two connected, but the bigger truth is the inner projected. It seemed so small when it was suppressed within, and now seems too big to contain or entrain with a single brain.

As the light is blocked by the dark reflected, the cave of creation soothes sleepy souls and new foals. Fatigue and intrigue, how will it resolve? The light’s rejection not yours to solve as your momentum of Love causes walls to dissolve.

As love adds up and becomes divided, it seems that the multitudes fear has presided. But there is new life created and exponentially forming, for the past is not yet present in the future’s new storming.

Chaos or quiet, what has the wind whispered to you? For what is eclipsed is just a moment which always renews. The engine of time has brought this catalyst of three into 7 from 4, as you breathe information to infinitely form.

If you see the divide, it whispers anew, as creative force flows in directions beyond what two eyes can see through you.

The winds and the waves speak to friends in their caves, as the inner rage is figured out, this moment spirals back into focus how Love has to shout to claim freedom in (3)Doubt.

The human cycles seam the smallest of time, but the clock strikes two seconds as the infinite collide. From two to four, divinity divides into more, countless conditions permeate the friction of old births dying.

Like a Cancer creation the sun’s elation is its opposite moon giving harmony to Capricorn tune. On the ribbons of sound the Mobius astounds as dissidents reinvent the covenant of connection run aground.

Your Light in the dark is the flame of inspiration. Anger fades through time until a healing instigation. Through death some learn of life, you bring new potential from strife. New ways of learning for the discerning as potential rejuvenates in the darkest night.

From pain to joy, connection is coy. It plays fools like violins to find focus amid musical ploys. Dance the rhythms and the melodic counterpoint within, for you are the harmony, the harmonious.

Even as harm finds freedom erroneous the musical wand waves fury to shore and the musical chairs take the game into lore. Confusion is the moment as chaos breaks down the visible, the puzzling picture isn’t clear and the pieces seem trivial.

As you sing the song of your heart’s creation, the fire warms and connects through joyful elation. Each dancer swirls winds into waves of delineation, as the gravity of everything collapses separation. Spirals spin off weakness into a new strength sewn golden, as it dawns refreshed in a breath emboldened. 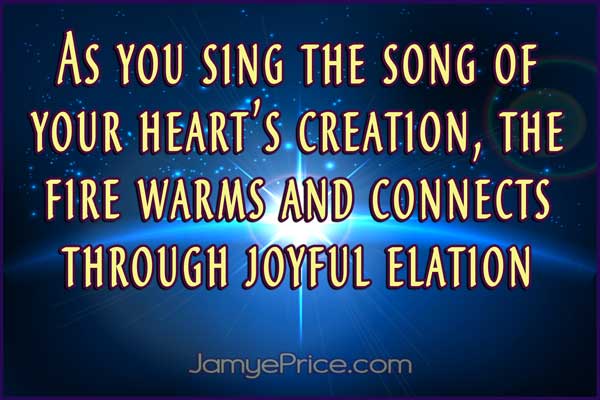 The Cancer was never protected so well, whether with mask, with vest or with hardened shell. Both poison and light penetrate cracks, it’s the love or fright that creates life or lack. The sun doesn’t control the moon’s wholeness each night. What you see is time’s flow through the sun’s brightest glow. But without shadow you’re too blinded and without experience, won’t know.

The scales of justice realign as the weight of chains release binds; but they no longer hold the body, they imprison the mind. The freedom of your heart needs the mind to find path, as the angles of anger reveal connections of graft.

This time was known in your infinite heart. You came in as a puzzle piece, not muzzling your grief, for you knew the path of pain starts the heart racing and Love always wins. It is the connection that binds Life into ever-changing structure.

One foot moves forward and the other shifts balance, finding the turning point of time’s dance spiraling invalid. You’re the music, the harmony and Time’s truest nature. For you permeate all, though the permanent will fall; and your graceful steps reveal paths of divinity effacing.

What do you see in the rocks, do shadows show soil hardened through toil or a meek, flowering bloom bursting concrete’s weak coil?

Time’s gravity rolls on and the seeds roll under, to a grain of sand that blossom is chaos and thunder.

Are you the big or the small, the nothing or the all? It’s just time’s deception slowing connection to understand the self and Earth separating Love’s reflection. It awaits beneath soil to bloom from gargoyle that redirect the misshapen into safety unspoiled.

In the body you’re restrained but never contained, as your tears on terra renew Love’s new era. You are time unique, even as a droplet magnifies the peak/pique of reflection in mirrors distorted from vexing. The spiral just turns, even as the earth’s fire just burns.

It sustains the contained and melts oceans of ice holding history’s refrain. The waters of connection freeze and melt, it’s all within the pain and the joy you’ve felt.

You’re flowing through time’s garden and blooming again, for the dawn of Love whispers your power unchained. Power is not given, it’s gained. Exercise your heart and your mind to define that shadows reveal lost treasures forgotten through time.

It’s the sun and the moon that surround your pure glow, there is no end to your Love within to illuminate and sow.