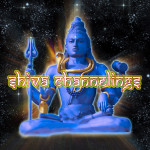 I did not know much about Shiva, I had just heard the name before.  The energy felt so loving and nurturing I assumed it was feminine given that the name ends in an ‘a.’ I had no statues, pictures or chants and I had given no offerings. I say that only to point out that the offering comes from within. Ritual and tradition can be a beautiful focus when in balance, but know that you have everything within you as well.

I began to recognize Shiva’s energy during sessions – the energy moves so fast and I am focusing on the information for the client so I don’t take names. ;0) It is always guided by the Hierarchy of Angels and Shiva carries the energy of release and a family line to me, so the Shiva energy is always a part of a session. There are millions (billions?) that carry a family line to Shiva, I am not the only one. So I was doing sessions like normal, just sometimes I would recognize the Shiva energy.

One day I sat to meditate and I told the Universe I wanted ‘clear, clear, clear’ guidance on what I was to do next. I had no expectations. They told me to channel Shiva and told me where to do it. It never dawned on me that Shiva wanted to talk in length. I chose a date about 3 or 4 weeks later and then I went into clearing mode to accommodate the frequencies. I had never channeled in public before, so I practiced; sometimes orally, sometimes written. It was a great experience and a very scary experience. So after that, I just ignored it. I really wasn’t too keen on being the white girl that channels Shiva. I don’t know anything about Shiva and millions do. I just didn’t feel comfortable with that.

At that point I knew only one story about Shiva that I read after I merged for the first time – likening the energy of Shiva (‘The Destroyer’ – I call Shiva ‘the Releaser’) to exhaling. If you don’t destroy that breath, you actually inhibit the continuance of life. I love the powerful allegory, but it also resonated with me because when I first merged with Shiva I heard “Primordial breath” while I blew through a mudra my hand was making.

Months passed and I didn’t channel Shiva publicly. I just avoided it. My Guides were gently nudging me that I should be doing it. Then they got a little louder. I started to think about why I was reticent. Again it came back to knowing nothing of Shiva while millions do. I felt no connection to the traditions, had no knowledge of the traditions and I had no desire to learn the traditions. Evidently, that was the point. I’ve always known that the skin we are in this time around is just that. We’ve been everything and had experiences of most, if not all, races and genders and more. I thought, ‘Why me?’

But the feeling persisted that I should be channeling Shiva. So I agreed to think about it and I wanted to get to know Shiva. So I Googled Shiva. Seriously. (A Saturday Night Live skit plays in my head that has a song about Googling people – ‘Why did I Goo-Goo-Google him?’ Very funny) Anyhoo, I googled around a little bit, but nothing felt right. I would find a little explanation or story and just click away. Then I found a video homage to Shiva and I watched it. I saw a cave with a frozen lingham-shaped ice door that activated me a little. Then came the pictures of the mountains. Pretty, very nice. I love mountains, Mt. Shasta was even in there. There was one part with a picture of 4 mountains. In the bottom corner was a snowy mountain that sealed the deal. When I saw that one picture I hit pause and I went into channel. I was HOME. I was with FAMILY. I sang and chanted, and I’ve been singing within that mountain for eons. There, in that mountain, was the energy of Shiva. And Shiva is everything.

We all are. I tasted the Wholeness with Shiva, if only for 30 or 45 minutes. What a blissful experience. After that chanting, I noticed that colors were more vivid.  I also got sick a few days later because the high vibration of the experience put me into a deep detox.  So worth it!

I had to know about this mountain. The video had some writing under it, but it was blurry and I couldn’t read it. I searched for about an hour and a half. I finally found it. It’s Mt. Kailasa (many different spellings) and they call it ‘The Abode of Shiva.’ I must say I do agree. (I later found that had I reduced the size of the video I could have read the writing!)

I am very grateful to experience Shiva. What a powerful grace and brilliance.  There is a deep Love to Shiva’s energy that I hope you feel throughout the channelings.