For those of you that have been on my newsletter, reading my posts and watching my videos, there will be a little review and something new. :o)

At the beginning of the year, I was shown a vision of Gabriel’s Horn. I heard a loud tone and saw the throat chakra opening. I first assumed it only referred to Archangel Gabriel; known as the messenger. A visit often heralds an unexpected gift, or more clarity and understanding, even if much is still unknown—especially “how” something will manifest.

Some also associate Gabriel’s horn with judgment day. 2020 certainly had the dynamic of bringing many things to bear that may have been in the background, suppressed or just not had such a pressing need to be dealt with yet. The shutdowns due to the virus made people deal with their loneliness, separation (or being “stuck” with family) and find new ways to connect, both with the self and others.

I soon discovered Gabriel’s Horn also referred to a math problem that seeks to solve the funnel of the spiral. Of course, Areon speaks often of the spiral. It is the internal movement and mechanism of the sphere and the toroid—it is the movement that builds form in our spiral galaxy and throughout our cellular structure.

The math problem of Gabriel’s Horn is a paradox of finite volume having an infinite surface area. This touches the metaphor of our own multidimensional nature; we are that living paradox of seemingly undefinable infinite that is just at the surface of a finite form.

We move through space and time at this density, with the loud and obvious senses yelling that only form is real, that only tangible has value, and that the safe path is what has been done before. Yet we can not help but live our infinite within the finite, as divine diversity calls us to create.

When I shared my Gabriel’s Horn vision at the beginning of 2020, I received two synchronistic experiences. One I’ve already shared, a beautiful painting by Suzanne Siroka. She emailed me this photo of her painting that began in October and finished days before my newsletter. She felt it was Gabriel and the blue sphere (throat chakra!?) was the Tone of Awakening. 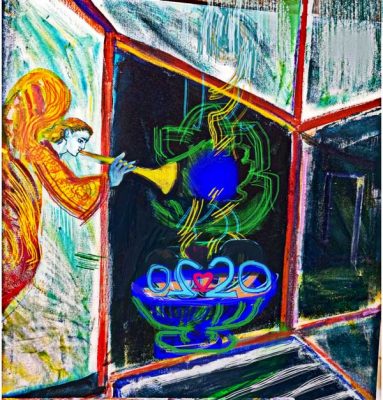 The 2’s in 2020 are facing each other, in a reflection that creates a heart within a container of the Tone of Awakening. Areon has overviewed 2020 as the year of Following Your Heart. I also love how it seems to be in a hall of mirrors, as we have certainly been faced more clearly with the reflections and illusions around us in 2020!

The second synchronicity I wasn’t guided to share yet. I kept checking in to see if it was time, but it wasn’t until now, in the month of eleven, that the time was right. An architect that had worked on a project reached out in early January to say that a physical tower, built with a modified version of Gabriel’s Horn formula of y=1/x was recently completed.

The tower was guided to be constructed by Meher Baba in December of 1944. It was completed and dedicated on December 23, 2019, 75 years later to the day (the synchronicity of timing again, infinite is not bound by time or space). The modification of the formula required shifting the rate of change of the spiral (indicated in the constant “1” in the formula) to 11. From the architect, Ty Provosty:

“I also want to share how I modified the formula to create the exact form of the marble clad tower. The original formula is written y=1/x. But I found that by using the constant of 1 the curve formed was too tight. We needed a more gentle transition from X to Y.  I finally settled on the constant of 11 to achieve this more gentle transition from the horizontal to the vertical. So the actual formula used was y=11/x.”

This triggered a few loose connections in my mind. The first is that as string theory began, physicists stated there was at least 11 dimensions (M-theory), because that was what they could quantify. The second is that Areon has often channeled about our “speed” in this density, and that if we were at a different speed/frequency, then different rules would apply. Ty had a beautiful response to that:

“It became apparent during the refinement of the design that the rate of change from the horizontal (symbolically physically grounded and also actually structurally grounded relative to the technics of building) to the vertical, (the symbolic journey to ascension – to the light), had to be made more gradual.

That is what the change of the constant from 1 to 11 represents. So, the rate of change needed to be more gradual.

It is said that to move in the timetable of God or, (as Meher Baba gave), Infinite Intelligence, is a more pleasant and “heavenly” journey to Self Realization. It possesses a sweet quality.

To be insistent about this timetable (which can be done) makes the journey as if in a desert without water. To make stern demands (which can also be done) about the shortening of this timetable is tantamount to traversing a path strewn with excruciating suffering.

The symbolism of this form also shares the idea that to reach the heights of ascension, one must be grounded in life. I relate that to my journey into my own darkness with eyes wide open and a softening of my heart.

This softening sometimes takes a while to embrace. It took me decades.”

This is a powerful reminder of how form imitates the formless, yet there are differences. November’s Soul Love is about finding your self mastery (the energy of 11) and from that empowered inner structure—your Crystalline clarity and diamond strength; you build the bridge to heaven, you become the structure of finite meeting infinite.

Why is this message coming now? Why not when it was initially received in January of this year instead of November of this year? Wouldn’t it have been better to have this information before the tumultuous journey of 2020?

This is the pace of discovery through experience, to move with the timetable of Infinite Intelligence as Meher Baba put it. It is the seed of wisdom. It’s finite in this walk through timespace density, yet infinite is surrounding it, creating the container.

But the contained can’t see the infinite with the physical eyes, it’s invisible. It’s like looking into a hall of mirrors. Do you get mesmerized by the reflections, or do you Follow Your Heart? As the finite 2020 winds down, it is calling you. What is the Tone of your Awakening?

Gabriel’s Horn in its infinite forms— through paint, through sound, through towering ground—blasts the illusions as the mirrors break down.

Gabriel is the messenger of the infinite. 2020 has brought us to greater focus with our own infinite engine, breaking the sound barrier of the noisy external realm with the quiet stillness of the heart.

Sweet blessing, as two contrary speeds collide and the sonic boom reminds you that fast and slow are two opposites that you navigate continually; you find your divine glory. As you climb the ladder of resonance, the tower that you build is your bridge to the Divine. You are the tower, you are Divine.

This world is yours. Inherit it. You of Love know that inheritance is for All, because Love is for All. It is infinite. You are contained within it; boundless, for infinite is the sheath of finite form.

In Finite In Two In You

Here we are at the month of 11 in 2020. As your heart calls you to follow it, you are asked to weave your infinite divinity into the form of Life. As you do this, the spiral reaches higher and wider, deeper and wider, these two opposites reflected into four directions.

Yet that is what physical sees, for four is really All; 1+1+1+1  11:11 four in one, the tesseract inside and out. They are not separate, they are pulsing, pleasing, purging. Eleven and heaven are One reflected.