As 2015 winds to a close, look back at how you’ve changed. Sometimes those changes aren’t obvious, but they are exactly what these times are about: looking beyond the obvious into the subtle realms that are the basis of the future forming. Have you forgiven, made new choices that entail sharing your truth more, loving more, holding healthy boundaries more, recognizing your glorious worth more, saying yes to yourself, to life, and to a new Earth building? These are the deep inner changes that create a new reality. It has been quite a year!

October, November and December are months of preparation and integration. Especially in October, there was a lot of release. November saw many an empath moving past old pain and into new strength. Wow! December feels a little quieter than the two, but just as powerful. As our animal teacher will foretell…

Expect more throat clearing (ears/nose/throat) in December as the energy field adjusts to a new amplification of heart and throat chakra integration (watch the November video for a detailed explanation of our energy field changes!). December will still have some focus on boundaries (yay – family!) and expressing yourself. It is a moment by moment experience that sometimes means speaking up or saying nothing.

The energy of Self Love is at the forefront in December. For the second year in a row, Mother Mary has come forth as I was doing the Light Language for the month. Her unconditional, nurturing Love is a beacon of how to Love the Self. All those erroneous teachings that say it is selfish to love yourself were designed to keep us in separation and shame. When you truly Love yourself, you are so fulfilled and whole that the world is viewed from Love. You see the beauty in others, you see the potential in others, and you see the potential and progress within you and around you that you can support into growth. It changes the world from deep within. Mother Mary’s rose-colored glasses don’t avoid, they just soften the glare. 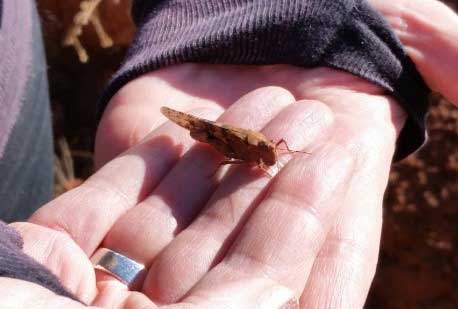 When I was out filming the December energies, I asked to be shown an animal teacher in a very specific way if there was to be one for the month. I received that message clearly. But then in addition, the animal crawled onto my hand! December’s animal teacher is grasshopper. Though things may seem like they aren’t moving forward right now – get ready for a quantum leap!

Areon is calling 2016 The Year of Clarity (2013 – Release; 2014 – Personal Empowerment; 2015 – Creativity). As I have noticed with how they label a year, it is a building of a foundation and they all flow together. Since their information is mainly focused on the mental and emotional aspects of Ascension, it correlates with how to enhance your inner perspective to create your new life. The grasshopper is a fabulous harbinger of the energy of 2016. Clarity is powerful directive focus that enhances creativity. You know when to move forward, when to wait, when to use current information, when to seek new information, when to stop, when to shift direction, when to start anew. In essence, you have a trust for yourself, and a trust for life. Powerful times, indeed!

Take some time to rest and enjoy in December as you prepare for a new year. Rather than push to create life, watch for the energies to indicate an opportunity or a necessity. Get used to working with life and allowing your desires to lead rather than fears. It is a subtle change for many, because our fears are often not as obvious or logical as we would presume. Look within for ease, and then follow yourself boldly. When it’s time to leap, you’ll know. Those leaps should feel like a YES to yourself and a YES to Life.